Nashua, N.H., February 4, 2009 - Mary Hermes, a Dakotah woman and University of Minnesota professor with years of experience in education, and her husband Kevin Roach, an Ojibwe artist with expertise in both tribal art and computer graphics, wanted give their children the gift of being raised in their tribal language during their young years. They helped found Waadookodaading School, an Ojibwe immersion school, on the reservation where they live. Over time, however, Mary and Kevin came to feel that immersion schools were not reaching enough people. Ojibwe learners and teachers needed more strategies for revitalization in addition to immersion schools. Ojibwe is the third most widely taught indigenous language in North America after Navajo and Cherokee. Yet, the lack of fluent Ojibwe teachers and teaching materials, as well as the physical separation of Ojibwe people across multiple reservations in the U.S. and Canada, has stymied people's efforts to learn and preserve their language. They felt that people needed effective curriculum materials and opportunities to learn and practice their language outside of schools.

In 2000, Mary and Kevin founded the nonprofit organization Grassroots Indigenous Multimedia (GIM) with the mission of developing curriculum materials especially designed to teach Ojibwe and other First Nation languages. Mary and Kevin later hooked up with Nora Livesay, a master's student in the University of Minnesota-Duluth's World Language Revitalization Program. 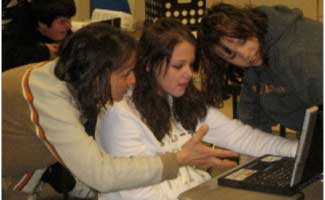 In the process of applying for grants to support GIM's work, Mary heard about Transparent Language from Ed McDermott in the International Research Services office at the U.S. Department of Education. He told them that Transparent had unique language tools and might be willing to let them use these tools to develop Ojibwe materials. Mary quickly contacted Michael Quinlan, CEO of Transparent Language, who offered his enthusiastic support, and a simple idea started growing into something big. Michael Quinlan says, "We are just thrilled to help GIM and all indigenous language learners. These languages are incredibly valuable treasures. They deserve to be preserved and shared across many, many generations to come."

Byki is a three-step, flash card learning system powered by two proprietary algorithms. A proprietary spaced repetition algorithm helps users learn words and phrases in the target language in the most time-effective way, and a proprietary intelligent refresh algorithm enables users to retain this learned vocabulary in their long-term memories. Byki allows users to create their own customized flash card lists tailored to their specific needs and currently supports the creation of materials in more than 100 languages. Learn Language Now!, a multimedia tool, combines a video immersion environment with grammatically annotated text. It allows users to watch videos of everyday conversations between native speakers and practice speaking by playing one of the scenario roles. The learner can choose to display or hide the text and opt either to read along with the video or read later. Within the text, they can check the grammar of each word. Users of Learn Language Now! can also create vocabulary lists from the text that they can then export into Byki to learn.

Mary says about Byki and Learn Language Now!: "These tools were the missing pieces of our efforts." GIM began recording semi-scripted videos of everyday conversations between Ojibwe elders at Ojibwe language camps and other venues. For Ojibwe and many other indigenous languages, it is the everyday, conversational language that is least documented. The conversational videos that GIM recorded are being imported into what is soon to become Learn Ojibwe Now! or Ojibwemodaa! (Let's Speak Ojibwe!).

In addition to recording everyday language, GIM has been working carefully to document the largely undocumented grammar of Ojibwe. Learn Language Now! contains a "grammar tree," an algorithm that defines the grammatical meaning of each individual word in the text. At Ojibwe language camps, people also began putting the words and phrases they were picking up at camp into Byki lists. They would record native speakers saying these words with iPods and import the sound right into Byki. Ojibwe camp mates began a lively process of sharing Byki lists with each other online that has continued after camp has ended.

The opportunity to learn Ojibwe via a computer program allows learners to circumvent many of these hindrances. They can practice the language in the privacy of their own space. If they make awkward mistakes, nobody will know. They can "eavesdrop on the recorded video conversations between elders in Learn Ojibwe Now! without an emotional burden on the learner or a time burden on the elder. Elders who agree to be video-recorded can share their language fluency with an unlimited number of learners at multiple points in time. When Melanie Benjamin, the former tribal chairwoman of the Mille Lacs Ojibwe reservation, saw an early version of Learn Ojibwe Now!, she remarked, "I could learn with something like this!"

Until now, very few Ojibwe second language learners have managed to learn their language through other means, "master-apprentice" being the most successful model. These indigenous learners have usually apprenticed themselves to an elder and learned the language by following this elder at tribal ceremonies. However, this method simply does not work for many indigenous learners, such as single parents with limited time and resources. Learn Ojibwe Now! and Byki Ojibwe offer indigenous learners the missing resources, flexibility, and necessary privacy to give them the comfort, confidence, and momentum they need to learn Ojibwe. Along with master-apprenticeship and immersion schools, this use of this technology has the potential to propel indigenous language learners forward.

The ultimate goal of GIM is to produce language products that are so widely used that indigenous people develop a common speaking base. GIM hopes to see people getting together to study with their software products. As a nonprofit enterprise, GIM is set up to share, for the cost of training, their expertise in using this software with any indigenous nation that finds it useful. GIM has already seen some interest from other indigenous groups and hopes to get much more. Interested parties should contact GIM directly:

At Transparent Language, we leverage our expertise in technology and in the research and practice of language learning and teaching to build unique capabilities for use by US Government agencies and organizations, as well as hundreds of public libraries, thousands of schools, and millions of individuals. We care about all languages, regardless of commercial value. We believe that language technology needs to work for all courses and curricula, not just a few courses. It needs to benefit not only individuals, but entire programs. We believe that great language technology not only changes the user experience; it transforms the economics, logistics, and reliability of language learning.